1- Encrypting the names of libraries and APIs.

2- storing encrypted names in the executable.

3- Calling an API called "LoadLibraryA" to load the library he wants to APIs from.

4- Decrypting those names to be valid arguments.

5- Calling an API called "GetProcAddress" to load the API he wants to use.

1- Encrypting the names of libraries and APIs:

In this stage, the malware author writes a program to implement an encryption algorithm taking a name as an input and return an encrypted string.

2- storing encrypted names in the executable:

In this stage, the malware author takes the encrypted names and store them in the malware as strings like this :

this is the main function of our samples calling the function that does "Dynamic API loading" which we are going to analyze:

we will see this: 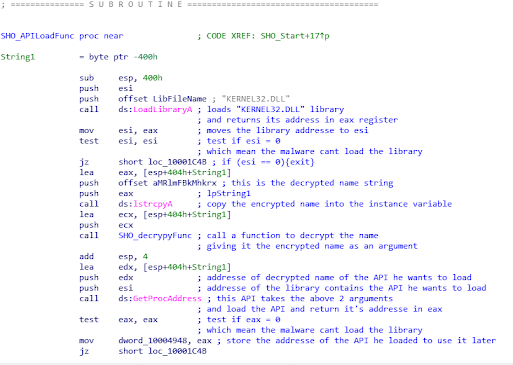 we will just focus on our encrypted name:

if we clicked on it, IDA will take you to its address the executable data section

3- Calling an API called "LoadLibraryA" to load the library he wants to APIs from:

LoadLibraryA: This API loads a dynamic link library into the virtual memory of

the calling program and returns its address.

so as you see it takes one argument and returns an address for the loaded library, lets see how it looks in our sample:

as we see he pushed the name of the library into the stack as an argument for the "LoadLibraryA" function, and it returns the address into the eax register and then he moves it into the esi register which got tested to make sure that the library loaded successfully.

4- Decrypting those names to be valid arguments:

the malware author now needs to decrypt API names to pass them as arguments for the API that will do Dynamic API loading, so the malware must have a decryption function that takes the encrypted names and returns them decrypted, lets see how does it look inside our sample:

so as we see in the above assembly instructions, 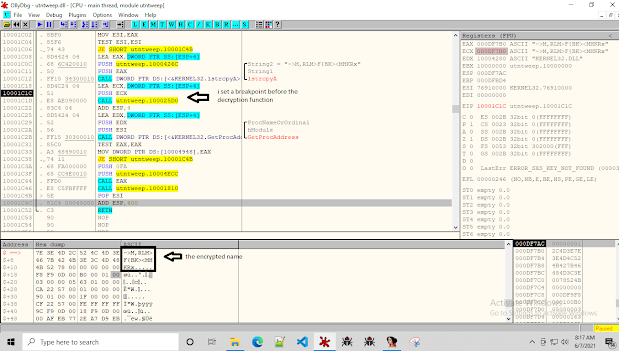 after executing the decryption function : 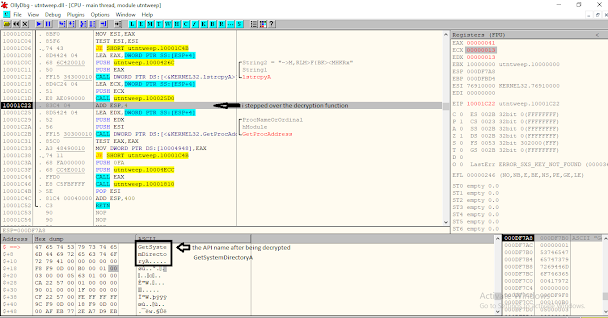 5- Calling an API called "GetProcAddress" to load the API he wants to use.

GetProcAddress: This API gets the address of an API given its name and the

address of the library that contains this API.

this is how it looks in our sample :

the GetProcAddress API will return the address of the API passed to it ("GetSystemDirectoryA") inside the eax register, the malware now can use this API as it wants.

now the malware managed to use Dynamic API loading to load and use APIs that will not appear in the executable imports when doing static analysis and antivirus will not be able to know that this is a malicious file when it checks it on the hard disk.